islandframed is owned and operated by Cindy Hillman she has been framing on (and off) the Island for 24 years.
She began her career in framing at RLF in Galveston in 1990.

Then in 1995 Cindy purchased E Street Gallery from the Carol and Don Mulkey and moved the business down one block on Postoffice Street and opened So Ho Framing Gallery.

Cindy enjoyed being a part of the renaissance of Postoffice Street and operated a thriving business for 10 years until 2005 when she sold her space in the Kress building to Design Works.

Cindy then continued to provide custom framing from a home based business until hurricane Ike came along in 2008.

Cindy worked for a while in Seabrook at Seaside Gallery for Ruth Burke ,but missed her customers and working on the Island. She has been at this location since June of 2013 and is thrilled to back in business doing what she loves on Galveston Island . 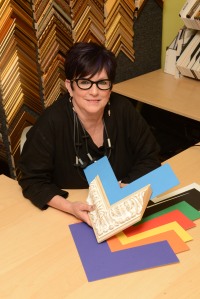